Another update for our “There’s a Special App for That” posts! We’re still using all of the apps we recommended in Part 1 – but we wanted to add 6 apps for creating social stories plus a great resource. Have a look at our others in the series:

We’ve been creating a lot of social stories lately as a result of working with a number of parents who are looking for new, innovative tools to use with their child. Social stories can be used for behavioural support, for describing and teaching social interactions, to ease transitions, and to teach new adaptive skills (among many other uses!). A few good posts for information on social stories are “What Are Social Stories?” from the Gray Centre and “How to Write a Social Story” from the National Autistic Centre in the UK. You can also see our previous post on social skills for more information. We wanted to share some of the apps that we’re using, since there are so many more possibilities now than even last year.  Now we’re even using tools that were not originally designed for creating social stories. These content creation apps have allowed us to customize and individualize stories to our student or child’s needs-one of the many benefits of new transformative technologies! Here are some possibilities for creating social stories:

Still a favorite, this app has a great “wizard” template that walks you throught the whole process of creating the story. One of the best features of Pictello is the ability to add video, so the app can be used for not only traditional social stories but for video modeling as well. We’ve recently used it to create a video for an older student who is doing an internship in the workplace, and needs video modeling as a method of breaking down each step within the job task. For more information on video modeling, see our previous post on its effectiveness and the research behind it for students with autism spectrum disorders.

We like Story Creator for social stories as there are many features that are unique and useful-and its an app that is really simple to use. The Pro version offers text highlighting and options for different layouts. The free version of Story Creator does a pretty good job-the only real differences between the free version and the Pro version are the ability to use different layouts and a few more exporting and sharing options. A few caveats though to report: we have had a few crashes with the video recording, as well as the text highlighting feature-sometimes the audio does not synchronize to the text.

We’ve always liked 30hands for digital story creation because of the ability to share stories with the “30hands public sharing and collaboration site” community, as well as to access stories that others have created. However, this is probably not a feature that most people would need for social story creation. There are a few things however, that make this app an interesting choice for social stories. After creating your story, the app has the ability to save to the camera roll, and the story can then be exported in multiple formats.  In addition, the editing feature on this app is unique and very user-friendly: add as many photos as you would like at one time onto your “board”, and then move those photos around in your preferred sequence, prior to creating the story. Then simply add your audio. Its an efficient method of planning and creating a social story.

Screencasting is frequently used for creating interactive tutorials or for “flipping” the classroom, but we’ve had a lot of success with it for video modeling as well as creating social stories. Many screencasting apps are free (like Educreations or ShowMe) which makes it a great option as well. As mentioned, the collaborative community aspect of these apps is not important for social story creation, but many apps (like Explain Everything) have multiple export options which make them good options for sharing stories between parent and teacher.

We love Popplet for just about EVERYTHING-as a pre-writing organizer, to solve math problems, for oral language development, as an organizational tool, and most recently for social stories. If you have a child or student who needs to see the “big picture, ” or connections among ideas or actions when it comes to a social story or a behaviour sequence, this could be an option. Plus popplets are so simple to create-it takes about 5 minutes to learn to use the app! 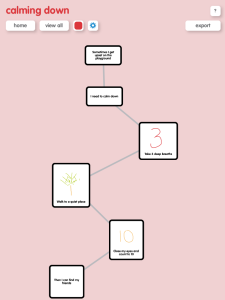 Although not a mobile app, Connectability.ca is a Canadian website and community that provides support for individuals with intellectual disability and their families. They have some great resources-one of them is the visuals engine, which can be used to create social stories, schedules, etc.

We love comments and suggestions from parents and educational professionals. Feel free to comment and send feedback!

View all posts by Andrea Prupas →

There`s a Special App for That Series